We humans, as living organisms, should have some information in our memory. But that information should not be complete, it should be a store of repeated observations as an individual. 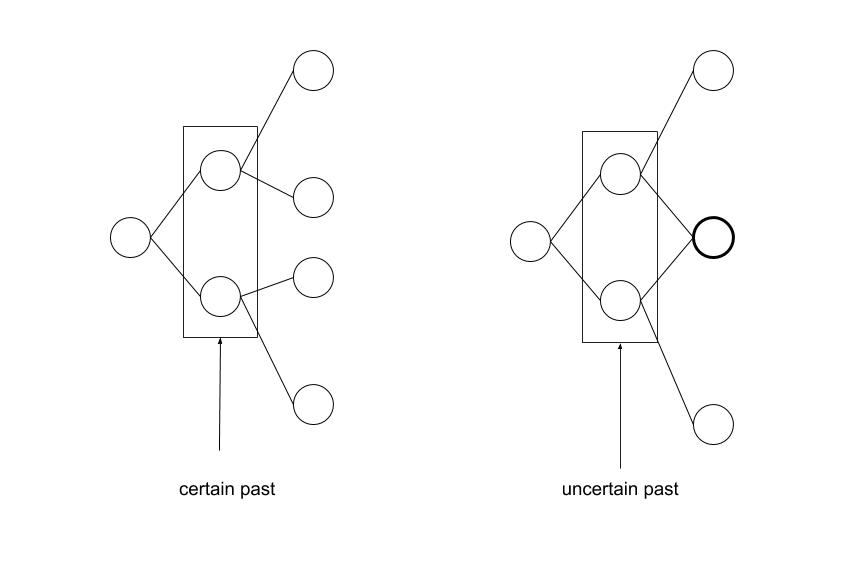 For example, if a mosquito is flying around at night while you are sleeping, you can choose to squash it or ignore it. Since the actual decision is not finished until tomorrow, you have uncertainty until tomorrow, a point in the future. But once you have crushed a mosquito, the world will probably split and you will move to the world where you have crushed it. In other words, you have memorized the information that you crushed the mosquito. And the world that you didn't smash it could exist as another branch.

The question is, what past paths are possible for the world where you crushed a mosquito? Because the information you have is incomplete, there are multiple possible paths. Looking at the above diagram, normal thinking would bring to mind the left diagram, but as a schizophrenic, I think of the right diagram. That is, there may be a point where the number of "possible past paths" is greater than 1.

It may be too complex and difficult to know exactly what the impact is, since individuals (or everything) is influenced by the environment and observations. However, given the biological significance of human memory and confirmation bias, it may be possible that choosing information that is convenient for you may result in choosing a world that works in your favor. If, from the level of the individual, there is the possibility of having a different past-path, what biological significance is there in synchronizing the information with other individuals? Isn't the information that humans have in their memory far more transposable than the fixed physical laws like speed of light?

These are just hypotheses, but what I'm trying to say is that uncertainty is a concept that can be applied to the past as well as the future. To demonstrate in a physical sense, of course, you need evidence.

Memorization is considered to be one of the easiest ways to over-fitting. If a school teacher tells a student that the test will be taken directly from a given question, the student can answer the questions by rote without "understanding" how to solve them. But what is "understanding"?

Memorization is quite simple at first glance: it can be built by giving two ways, storing a problem as index, and retrieving that problem by sending some query. The following variations are possible:

On the other hand, a system based on some "intelligence" might use a different method than search. 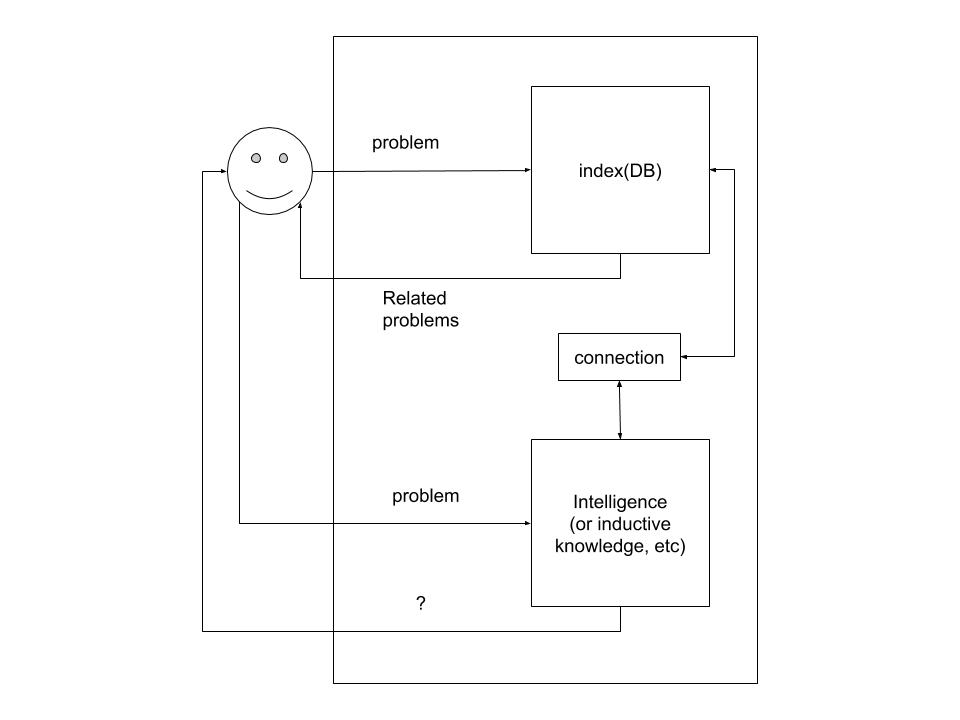 Whereas the memorization system was the type of knowledge that retrieves the problem itself, the intelligence-based system appears at first glance to be executing some program (deduction, pattern discovery, etc.).

In addition, some of them appear to be executed by a combination of the two systems:

How about "memorization of the rules"? For example, you can solve a quadratic equation by memorizing the rule of the formula for solving a quadratic equation, but can this be called "understanding"? The rules in this case are simple, but it is possible to memorize rules in combination with rules, and a meta-rule about how to "combine" them might also be memorable.

When students solve quadratic equations, they don't just memorize the solution formula, they also use discriminant expressions and factorization, depending on the situation. This kind of knowledge seems to be acquired through habituation by solving a lot of problems, but does that habituation have anything to do with intelligence or understanding?

John von Neumann had this to say:

“Young man, in mathematics you don't understand things. You just get used to them.” ― John von Neumann

Why can't a computer run a program like a human being runs in his or her brain?

“Young man, in mathematics you don't understand things. You just get used to them.” ― John von Neumann

But if you google the terms hypothesis-driven or data-driven, you'll find that there's few formulation. So let's do a little thought experiment on these terms.

Consider the claim "I found a pattern in the data". It seems to me that given labels, a model fitted against it from features would imply a pattern. So is the "pattern" a hypothesis? Did the hypothesis exist a priori? Or did you find it later?

This is a difficult question because at the point where we have labels, we implicitly hypothesize that "there must be a pattern that can explain the labels from the features by more than P%". However, "this model (pattern) will explain the data above the P%" is a hypothesis that emerged later.

As already pasted the above image, the function f1 means that the hypothesis was "generated" from the data D1 that was there first. The function f2 is "testing" the generated hypothesis with different data than the first. Think of the range [0, 1] as implying a normalized score. Ideally, D1 and D2 should be independent.

In a place like kaggle, you generate a model (a hypothesis as a pattern) from the provided data D1 and show its generalization performance in the leaderboard test data D2. This is "data-driven" if you think of the model as a hypothesis, since you did not generate data D1 yourself.

However, generating the data D1 is labeled based on some pre-hypothesis. In other words, the hypothesis is, "With this feature, we can explain this label with a score of P% or better". In this case, it could be called "hypothesis-driven".

If the hypothesis is "generated by someone looking at the data trends of a feature," then this is data-driven. And the data used as features may or may not be designed to be labeled as such.

On the one hand, you can say, "The data collected here will be useful for this kind of hypothesis later on, so let's design a system for it," or "This kind of data column is going to need for this hypothesis".

That's what I think. If someone says "this is the only way to do it", I think it's possible that they're only looking at one side of things. Even this article is just a "hypothesis".

Do you think Twitter envisioned all the natural language processing tasks (i.e., hypotheses) before lunching the service? If so, you are a complete worshiper in hypothesis-driven.

Ultimately, everything is a physical phenomenon, and what is produced by it is data. Did God generate that data on the premise of some hypothesis? In the end, we can observe is not a hypothesis, but data, I think. Or, will the hypothesis itself affect the data being observed?

As a mentally challenged person, I have certain unusual experiences.

After such an experience, it is not surprising that you might have a further delusion, such as,

It sounds like a kind of sci-fi world. I think this delusion can model to some extent as just mathematics, so I will give it a try. 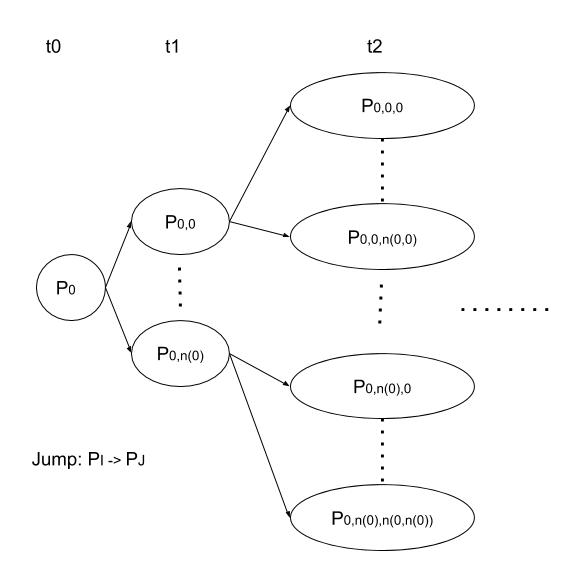 , and so on, following various branching possibilities from a point in time to the future. Normally, time cannot be reversed, but given a path

, the question is: what is a jumpable tuple of

(or a jumpable condition)? Is it possible to jump vertically, but not in the opposite direction? Unfortunately, this is not only in the realm of mathematics, but also the physical laws of this science fiction world must be taken into account.

Also, if there are worlds

is each world, is

finite? Or how many branches from one path to the next,

In this way, it seems that the world of science fiction can be mathematized. Of course, this would not be a mathematicalization that would explain the real world, but if we can make a mathematicalization that assumes fictitious physical laws of a totally fictitious world, there may be no guarantee that mathematics will correctly explain the physical laws. I think it would be difficult to find a model that fits without repeated experimentation and observation.

However, "algorithm" is a bit different stuff. We can prove something by creating it! (However, sometimes, we need to prove that we can't create it.)

Login to quote this blog

You cannot quote because this article is private.